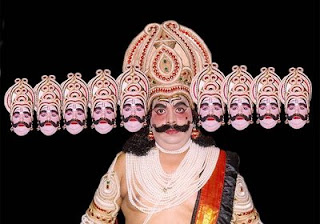 What’s the meaning of ‘Dassara’, a traditional hindu festival! Is it just the Victory of Rama over Ravana (Victory of Good against Evil) as told in the childhood?

Dassara festival is a Celebration of RECOGNIZING What I am NOT, that is…Ten heads of Ravana…
(as described in mythology)!

Seeing directly, what I am certainly Not, these ten things. The burden of ten sticks this apparent ‘me’ carries, until it recognizes itself!

What I am certainly not? First Body (1), second Prana/Breath (2) hence not mind (3) which is extension of breath hence not even thoughts. I am neither identified consciousness(4) as it is identified & recognized from the age of 2 and will disappear on dropping of the body, so certainly temporal. When I am not this consciousness also, how can I be three states by which this consiousness 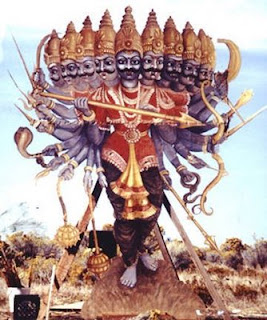 operates, like knowingness (5), waking state(6) & sleeping state (7)! At the same time when I am not this consiousness also, how can I be three gunas (attributes) by which this consciousness  functions, such as satva-guna (8), rajas-guna (9) and tamas-guna (10)!

What remains after the negation of
ten identities, ten heads of Ravana is THAT
Indescribable, which does not fall in “subject-object type” knowing. No one can know it!

Recognition of IT just Happens.
Celebration remains without A Celebrator;-)!